2005 League Winners​
Well done to a number of Leicester Celtic teams who won their leagues this season. The following teams have won the league for the Season 2004 / 2005.
U8 A1 SUNDAY
The U8s won their league by finishing ahead of second placed Manortown United.
The team is managed by Eamon Doyle.
U11 MAJOR SATURDAYThe U11 Major did extremely well to win a strong league by finishing ahead of Stella Maris.
The team is managed by Tony O'Connor.
U18 PREMIER SUNDAY
The U18s had an excellent season by winning both the U18 Premier and the Christopher Cup.
They won the league ahead of Castleknock Celtic and beat Portmarnock in the Final of the Christopher Cup to claim the Double.
The team is managed by Declan Ellison. 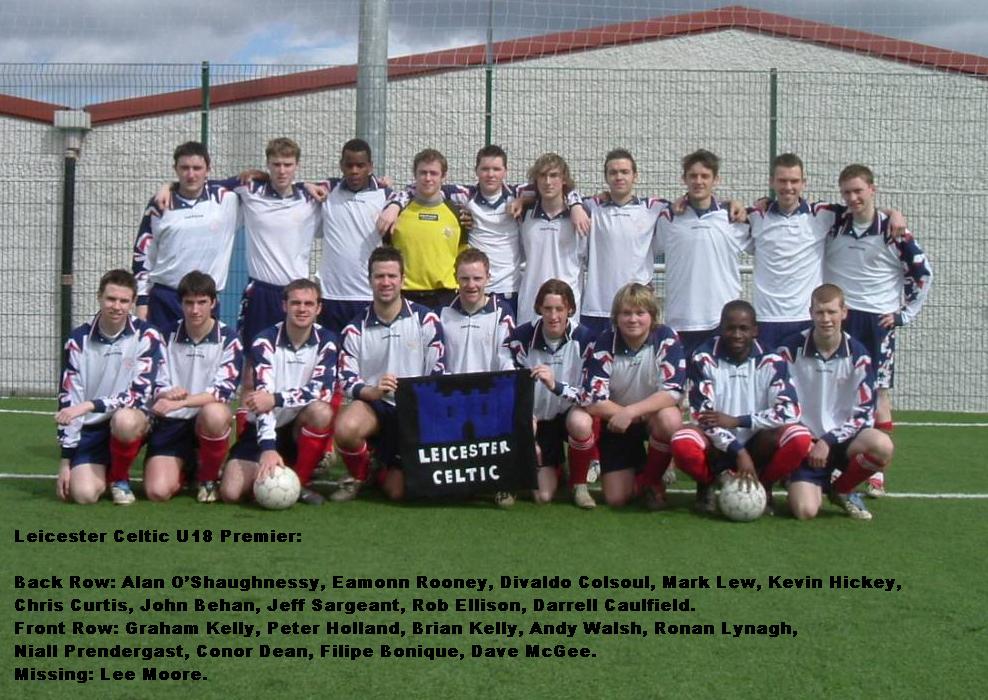 The team is managed by Declan Ellison and plays in the 18 Premier.

MATCH REPORT
Leicester started very well with good possession and excellent passing football being played. They were rewarded with the first goal scored by Ronan Lynagh, who connected with a loose ball from about 25 yards out on the right hand side. The pace of the shot left the Portmarnock keeper stranded with no chance.

The Leicester keeper, Mark Lew made a very important save when a loose ball set free one of the Portmarnock players who was one on one with the keeper. Mark quickly reacted and made an excellent save with his feet to deny Portmarnock their first goal.

After some excellent pressure from Leicester, the second goal came from a ball played over the top, which Filipe Bonique collected, beat the centre half and rounded the keeper to slot the ball home. The Portmarnock goal came on the stroke of half time, which set the scene for a very exciting second half.

In the second half, both teams had chances with Filipe again breaking free only to be denied his second goal by the upright. The last 20 minutes saw Portmarnock throwing everything at Leicester, who defended bravely and managed to hang on for the final whistle.